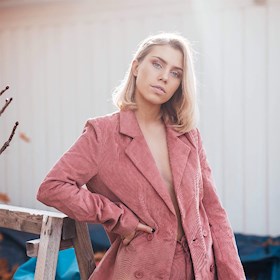 // Hello sweat hearts! How are you?
My day has been very productive, although I woke up very tired. I stayed up late yesterday to edit yesterday's vlog. It is now uploaded on my YouTube channel and you can see it in the video down below! In the vlog you will follow me, Philippa and Penny on a shopping day with good food and us just having fun. At the end of the video I also show what I bought + some other things I've ordered. I think you will like it!
When I woke up this morning, I made myself a smoothie and then drove to the gym at eight o'clock for a back and shoulder workout. So nice to train in the morning so you have the day off afterwards.
When I got home, I answered some emails and responded to your comments. Now I going to edit the last New York vlog ( two months later ... Haha). I also vloged the last day in New York but the material wasn't really good. So this vlog will be the last one.
I also have some driving theory to do today.. Yeah, I got some stuff to do, right? Time to get started maybe! But first coffee ;-)